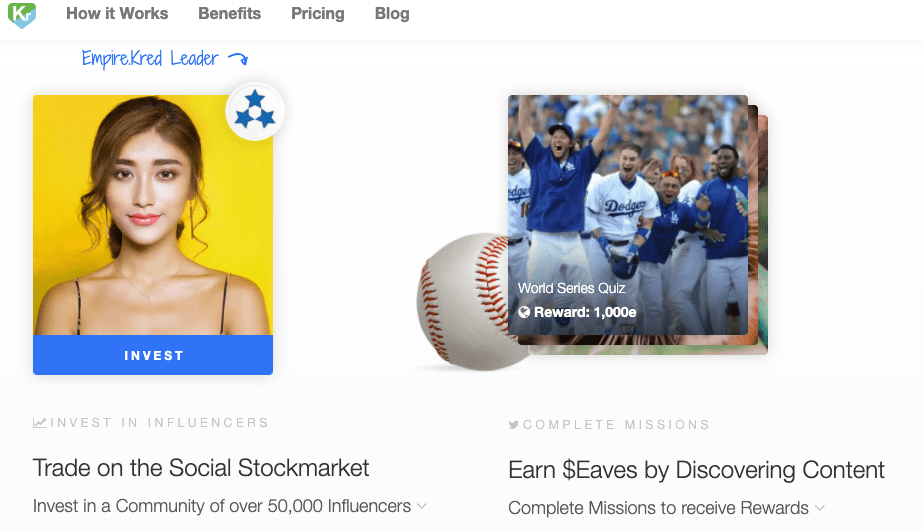 I’ve caught some flack in recent weeks from friends for my growing addiction to Empire Avenue. It’s an addiction to which I am only too happy to admit I have. I’ve experienced a lot of mental discomfort over spending a lot of time on a service that may or not be beneficial to the other social media work I do for clients.

Some might think that I might be unable to spend time building friendships on Facebook if I’m busy selling and buying stocks on Empire Avenue. Blah. Bullshit. Here’s why.

I’m not going to go into the specifics of how exactly EA works. Learn more here and here. The best way I can describe it is that it’s a “social media stock market” combined with Klout. It lets you rank your personal brand through a score, not only determined by buying and selling activity on the site, but via the activity on your social network accounts, which are linked to your profile.

Big Whoop, most people say. “Who Cares?” Here’s a direct quote from a very good friend who’s opinion on these matters I respect much: “So…silly…don’t care. Seriously virtual stock markets? I don’t even like the real stock market :)” That pretty much sums up what EA is up against. Regardless of what people say though, the service is in fact vital to me for two main reasons. Here they are.

Not since the glory days of Digg (and to some degree Reddit’s current renaissance) have I found the level of community excitement and joy that currently exists among the denizens of EA. Facebook groups of all kinds have popped up bringing the latest and best stock deals to the table every morning. I personally have discovered new friends at a pace I have not seen since 2009 when Twitter took off on a grand scale for the first time. For me a huge part of the reason for participating in these networks is the interaction with folks I never would have met before. There’s some thought that EA is only at the beginning of its rise. Seeing the level of community activity at this point makes me hope it’s possible – and that’s exciting to be a part of.

Perhaps my favorite aspect of EA isn’t the buzz of having a lot of money to spend because I made some great stock transactions (buying low and selling high). It’s the fact that you connect your Twitter, FB, Linkedin, YouTube and Flickr accounts to your EA profile. When you do that a number score is assigned to each of them in dashboard fashion at the top of your profile. (This in turn provides much of the information that determines your overall stock value.) In my case, I have been able to notice number scores that are unimpressive or low, and work on them so that they rise.

For example, my Facebook score was only at number 10 (out of 100) for much of my early time on EA. That caused me to reengage my FB friends on a higher level. That had the effect of letting my FB score rise to 36 and higher, which has bolstered my overall stock price. More importantly, it has had the effect of letting me be more effective at what I do for a living, (attempting to engage communities on social media), all because I had a wider, clearer vision of what I was doing. EA served as an easy-to-understand dashboard that made this possible.

A Final Note on Empire Avenue

There is some criticism floating around regarding Klout in connection to EA. Some people in the EA community have expressed dissatisfaction with Klout because the “social media score” it gives to folks doesn’t have an interactive element the way EA does. “Klout determines its scores without the transparency that EA provides,” one told me.

I am of the opinion that the two are separate and should be looked at differently. Klout, to my mind, gives an important, if sometimes somewhat vaguely determined estimation of what someone’s social media influence amounts to. EA may give a better indication of how the score is derived, but it is heavily influenced by the actual activity on the site. So inherently the score isn’t going to be viewed, at least by most people, as the end-all-be-all determination of what someone’s influence is. Some people would also be of the opinion that the whole enterprise is a waste of time. “I’m too busy working to build the community for my site and I don’t have time to measure how fricking great my influence is. All I care about is driving traffic and bringing quality content to people.” I think all sides have to be examined and taken into account, and it’s inevitable for people to seek out things like Klout scores or EA stock prices in order to gauge personal online effectiveness. One thing I do know is, EA is a fun way to spend some time and the “addiction” has improved my ability to do my job.